I added a “dispatcher” to the frogger code. Within the dispatcher the old “MoveTo-InBetween” routines get called. The dispatcher uses subroutines, so theoretically JSR and RTS cycles are wasted, but the code looks generally so much nicer, that I leave it in (as long as I don’t need extra cycles).

The ym decoding is done via the dispatcher, I split up the decoding in eight (I think) subsections, each of these subsections is independent of the others and they ar 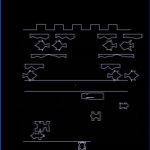 I am about to finish editing top down sprites (see image),  there are 2 different cars, a van, a racing car and a caterpillar. More or less like the original.

The vectorlists in general are about 1/3 longer than the ones used before. Alltogether I think about 40 vectors more are drawn now, than in the original vectrex frogger. I used to only count objects drawn – but at some stage the vector count of objects DOES matter. The caterpillar alone is 26 single vectors. In vectrex dimensions that is HUGE.

I also slightly enhanced playability by stretching the play area a bit. Frogger now does not as easily get out of bounds. The right most house was sometimes really tricky to get to. Now that jumping is slightly slower (animation), it has been getting even more tricky. Nonetheless, adding the animation was a good idea. The jumping feels more like “Frogger” than befor.

I still have to do much playtesting, doing sound effects and other stuff, but the new version is coming along nicely.