Well, at the moment quite a bit is going on “underneath” – stuff that even less people will ever use than the whole Vide package :-)!

I added much documentation in vide, e.g about supported “code generation”, which as of now consists of:

Example code which was added (in doc and in codi):

Regarding the Lightpen examples: These are well documented in the source code and described in the vide documentation (newest version is online btw).  The examples were mainly taken from Artmaster – but as said – documented, and “ripped” for easier usage. The provided example shows four different lightpen “situations”:
(see vide doc for more…)

Quite a few bugs were removed in dissi, and I added two new command line commands both of which are “special” for bankswitching. The only one a regular user might find usefull is:

Using this option memory breakpoints of all kinds are applied to all banks at once, thus placing a breakpoint at address $1000, the breakpoint is added to all banks, not just the one currently “running” (which is the normal case). With this debuging of wildly bankswitching cartridges is much easier (you will understand shortly why this was usefull to me).

You might remember, that some weeks ago I added emulation to the DS2430A eEprom (used by YASI, Protector and Thrust to persist player information). Recently I was made aware of the fact, that Vector Pilot also supports an eEprom – although a different one: Microchip 11AA010.

After digging up some information it was revealed that those two chips work quite differently, mainly:

I started that emulation and everything is going along well, although I (as usual) miss some hardware I can experiment with. I have a Vector Pilot original, which communicates emulation wise quite satisfactory with the emulated chip. But there are still some fixes to be done.

Also added are “views” to the emulated hardware. While some views are quite boring (lightpen), others are merely interesting (VecVoice, VecVox) some actually do provide clues one can use for programming (eEprom).

I hid them a bit more than the other debugging windows, since they won’t be often used. You can only open them by two new command line commands in dissi:

Some pictures for conclusion: 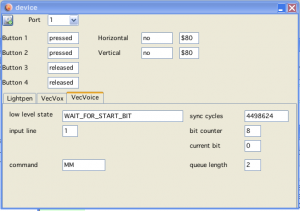 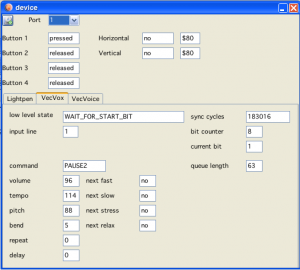 Anyway I will be – again – “Yuppiih!” on a short holiday trip and won’t be near a computer for the next 1 1/2 weeks. So nothing will be done in the next days.