The last two days were quite productive.

Yesterday emulation of extra RAM made its way into Vide:

Animaction is working – added a “Cartridge” section for the RAM too.

Also – this was nearly the same, Spectrum RA emulation was added: 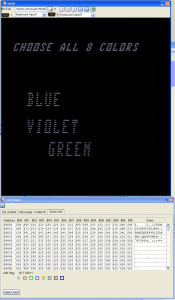 Spectrum RA extra features (8 LED and a “coin button” [Cartridge external line, VIA Orb PB6]) can only be accessed from the extra cartridge panel (which in turn can only be switched on via command line in dissi). RA Spectrum also uses an extra RAM space, although in the $8000 area (Animaction in the $2000…).

Last but not least, Logo from Alex Nicholson, this one has a whooping 8k additional RAM located at $6000. 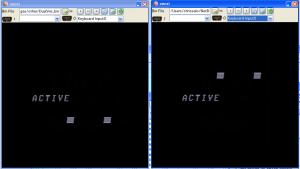 Note, due to the same reasons that VecLinkV1 ist somewhat unstable in vide [no proper, synchronization between the two in different threads running emulators], this one too is a bit “flickery”. Once I have done all other stuff I want to do with vide, I will add a proper “dual emulation”, where two emulators can run in cycle sync. Doing that will get rid of these last disturbances. If anyone wants to use any of the link versions befor that far away day in the future and also would like to use vide to develope – give me a call and I will prioritise…

Also did some small stuff:

Now I will do some documentation – and finally – 3d-imager.
(or anything else which might prevent me from that, like adding proper Joypad support…)