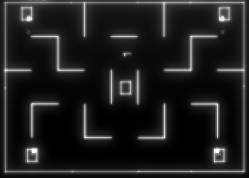 As mentioned in my last post – “der Luchs” is (re-) programming his game “Menschenjagd”.

We met at an event last month and came to talk to each other. One thing led to another and he asked my opinion about it – and me not being shy – told it :-).

Sascha does not think of himself of being a “programmer” – inspite of him releasing game after game on various platforms (including more than 10 games for the vectrex). He keeps saying “I am an musician – not a programmer” – that might be one of the reasons he is a bit shy about showing (or sharing) his source code with other people. (Let me tell you: On many different levels – “I have seen much worse! -Nothing to be ashamed of!”)

On the other hand – I myself always liked “opening my sources” for two reasons:

a) so others can profit from the time I invested

Actually so far mainly bullet point a) seems to work out the way as intended. And that does NOT mean that I don’t produce flaws – but I think people (in general) don’t care about giving much feedback.

Anyway. I would like to ask your opinion about our thoughts about the way the player/enemies/shots “navigate” the labyrinth in Menschenjagd.

First – although I programmed a lot vectrex stuff – for many assembler years I have not used many (if at all) BIOS routines – so using BIOS was not natural to me anymore (getting Obj_Hit to work needed some surfing 🙂 ).

Challenge Labyrinth – how to navigate?

For that particular collision detection, each wall segment was treated as an object and each player as another object. If a collision was immanent – than the move was not allowed.

In order for this to work, all labyrinth segements had to be tested against all players (I summarize under the term “player” also the enemies from now on). This actually did work – but needless to say – this was quite time consuming – and for various reasons (which I am not going into) – to slow.

In the following I am trying to explain with my own words the labyrinth test we came up with. Comments – especially more performant suggestions are as always welcome.

We divided the labyrinth into “tiles”, like the following (badly drawn) picture shows: 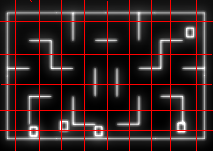 The following two assumptions are made:

2) Each rectangle inclosed in red lines is a tile. A tile like in a board game (e.g. “Carcassone”) and on each tile walls are painted. Walls from the center to the edge of the tile. The walls block player passages.

A player that is located on a node of the red lines can only go to a direction where both neighboring tiles have no corssesponding wall sections (this will later be reduced to a check for just one tile – we assume the labyrinth is build correctly).
Example – this image:

Bit 2 represents right, bit 3 represents left.
Doing that we created a 4 bit value for each possible permutation of walls.

Assuming the player is still at the position mentioned above, following pseudo code can test if he is allowed to go right:

This is roughly the algorythm currently implemented (for one direction).

The actual implemented routine is a bit more complex than above. To give you a picture just a few more pointers.

– the players “screen” coordinates are completely disjunct from the labyrinth coordinates, but they must naturally be “synced”
– the labyrinth coordinates consist of
* coarse coordinates (which exactly represent the tile positions 6×10 in the case of the above shown labyrinth)
* fine coordinates, which range from -7 to +7. 0 (zero) is the center of a tile, and +-7 is a position close to the edge of a tile.
When a fine positions absolute value reaches eight it resets to the negative and the coarse position is updated accordingly
– the coordinates in the labyrinth start with 0,0 in the top left corner and can only grow “positive” from there, this is because the data representation in memory is just an array – and with these coordinates it can be addressed easily
– some additional testing must be done so the player can not “enter” horizontal lines while going left and right (same for vertical and up/down)
– the routines support player “sizes” so the player can move between the labyrinth walls (in the above picture – the read lines are “wider” than just one pixel)
– using the “fine positioning” – you actually only have to test when the coarse position changes (so -> only every 16 “pixel”) (or – here comes the player width – (16 – playerWidth) )