This weekend has been total Vectrex – or I should rather say Vide. There were some things on my todo list for a long time – and this weekend I ticked some of the items off.

The one that was most work of all was a “simple thing”.

From the next public version on, you will be able to start Vide from “anywhere” – it does not have to be the Vide directory anymore. This was major code change. Believe it or not. I did most of my file system access with the “current working directory”. And stupid as Java sometimes is – there is NO WAY you can change the working directory from within the currently running JVM – even using JNI (which I don’t realy like) does not give 100% reliable results.

The only way I could “nicely” implement it – was to change ALL (or nearly all) filesystem accesses in the whole of Vide.

All vectorlists, all songs, all formats, all downloads, all tmp access all zips and unzips – EVERYTHING. I guess I must have edited about 100 files.

And I tested and bugfixed all of these too. Testing is not so easy here either, 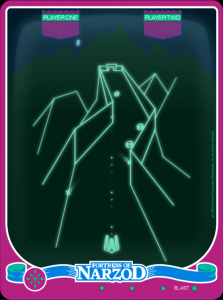 since when starting from netbeans the CWD is always the Vide directory – so I had to do all my testings on a seperate Vide instance – one that was not running from its own directory – thus debugging was more difficult and and and.

I think I tested all possible file accesses – if you encounter any strange FS behaviours – please tell me!

All things “old” Vide could do with java graphics – now new openGL Vide can do to – and some more.

Things that made it into the current “run”:

– the vectrex “screen” (like it was also available in ParaJVE)
I decided against display of chassis and/or joysticks – even optional.

– Border overflow – can’t see that in the sc 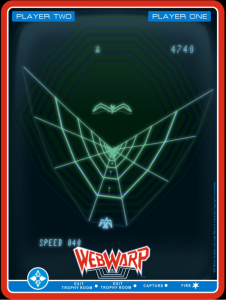 reenshots – but vectors printed outside the “normal” display area now let the borders “glow” to some extend.

– full “panel” display – while vecxi is active you can press “SHIFT P” to enlarge vecxi to the full Vide display size.

– full “screen” display – while vecxi is active you can press “SHIFT F” to enlarge vecxi to full screen.

– keep aspect ratio, this mainly is usefull for above modes 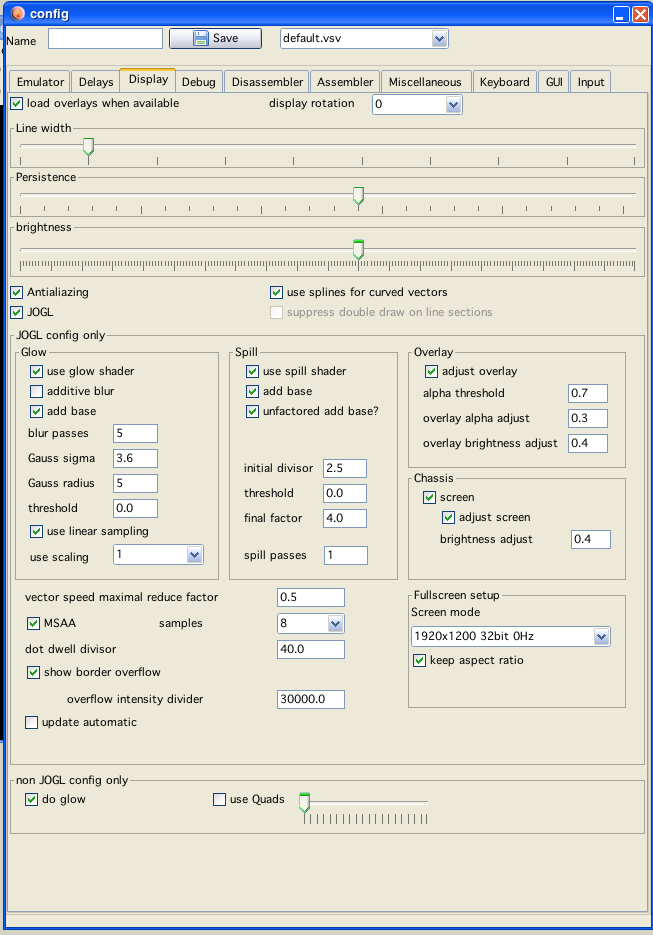 With one “tick” in the configration you can now switch all “nice” debugging/development stuff OFF. The off switch is implemented so, that in the emulation core certain routines are not called at all anymore. This has brought some speed increase – for those who need it. 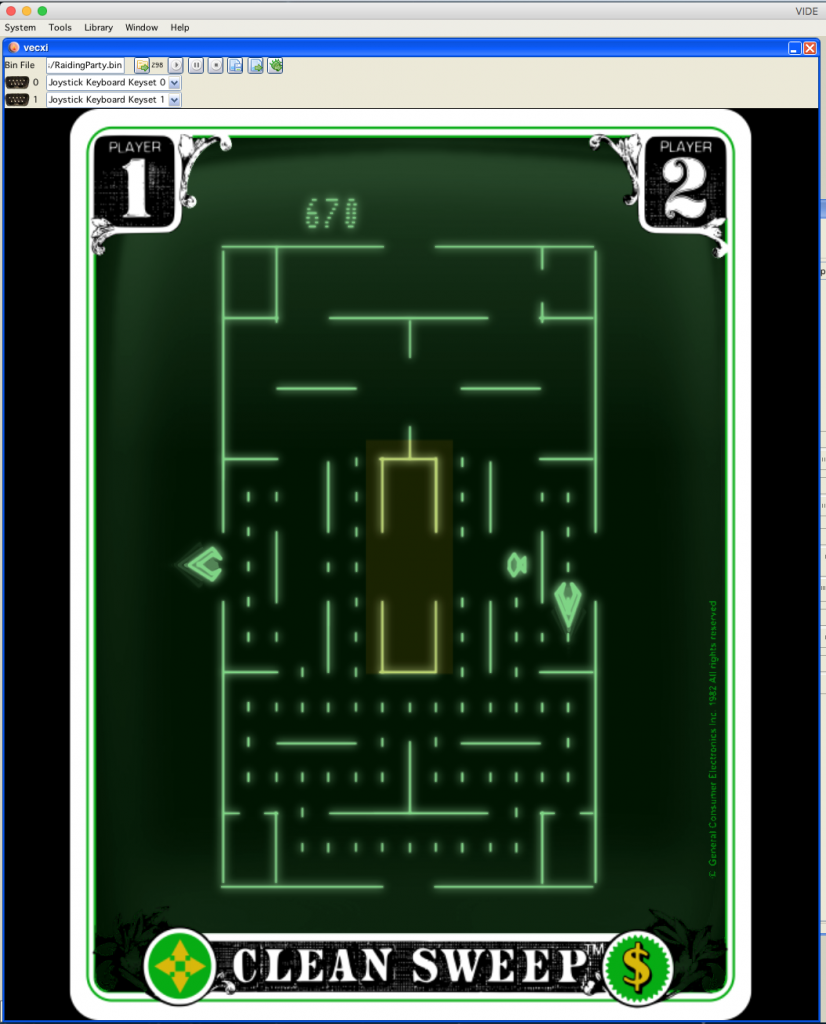 Or perhaps even more impressive: 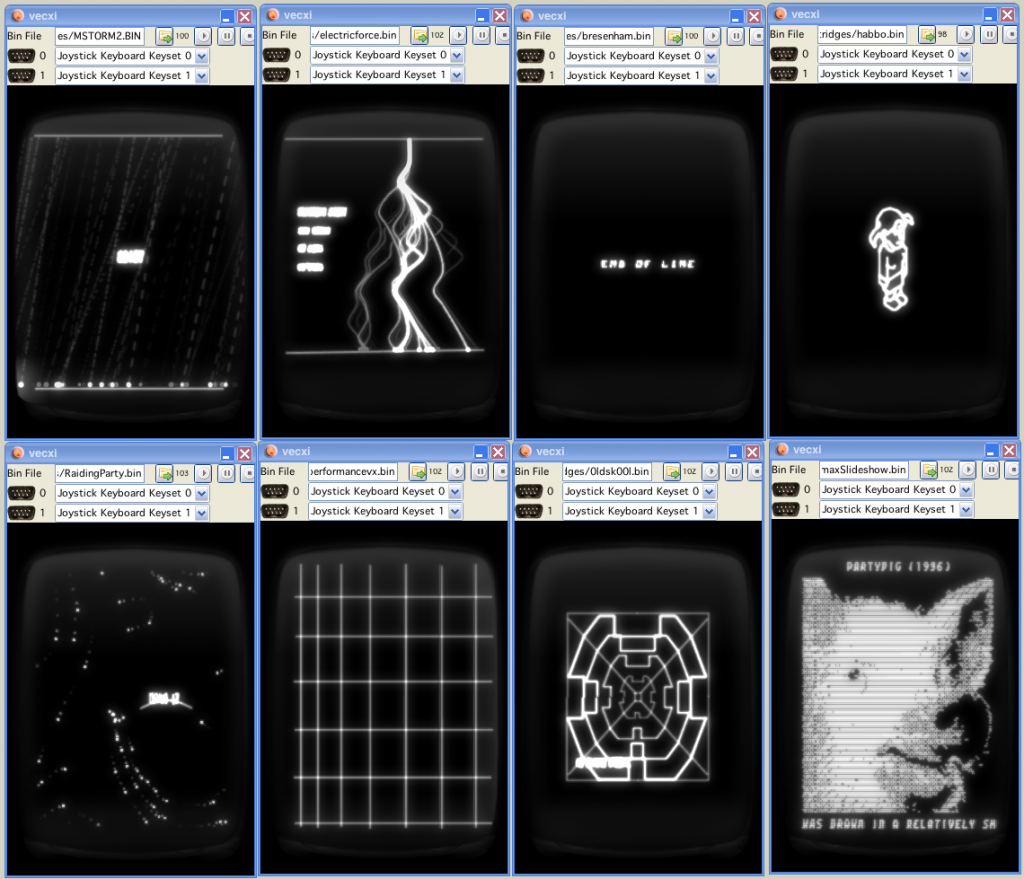 There is more testing to do… and haven’t written a single line of documentation yet.

The 5th September is Vide’s first anniversary – I probably will not make that date – bother – would be a nice birthday release!

6 thoughts on “3rd of September”