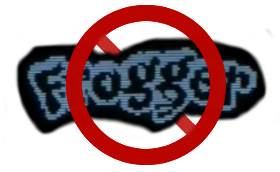 I stopped working on the source and I also decided there will be no new version of Vectrex Frogger.

Due to several circumstances which will be explained further below, Vectrex Frogger is dead and the only version available will be the one I did 18 years ago.

Why will I not work on it anymore?

Why will there be no New Frogger version?

For all you non German readers, the same info as on the AOL page above about the name:

‘KAULQUAPPE’ translates to ‘tadpole’, ‘QUAPPE’ then is a shortcut of tadpole, and KARL is just a name that is similar to ‘KAUL’ (stylistic device: “homophone”). So if you want to translate it to, for example English, you might get something like ‘CHARLES POLE’ (Charles being the English version of Karl) or Tedpole (‘Ted’ being a name which sounds similar (sort of) to ‘tad’…).

Following another short video, nothing much changed, just some few polishings. I let the game run itself – didn’t touch a button, the gameplay you see is the “attract mode”.

7 thoughts on “Frogger no more!”