I “talked” about it for quite some time – but this week I actually did some Frogger programming.

Following things are on my schedule:

Over the last weeks I sometimes edited some vectorlists in Vide – but only this week I put the first batch of them together and implemented them into frogger (see Gif – image).

This was more changing of the original source than I expected – since the player “sprite” wasn’t animated befor. And getting into 18 year old source code is no mean task either.

Anyway – as you can see top down (& animated) froggy is implemented.

As I have written befor (again nearly 20 years ago), one of my main targets with frogger has always been that it should do everthing within 30.000 cylces for the display to stay “wobble” clean.

Since I want to add some more features I had to look at the code again.

I tweaked and changed the vectorlist generation part till it was absolutely “mega-performat” – really – the first frogger level (one of the most busy ones) did refresh in about 22.000 cycles! 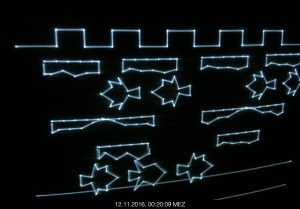 Only thing is – the graphic was the same as it always had been:

It was the “typical” vectrex vector graphic, where you as often as not see a “dot” on one side, because the light was switched on too soon.

Even if I did it myself I am absolutly thrilled how 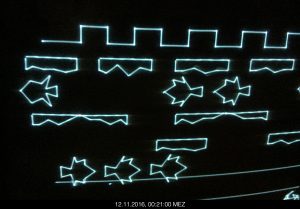 Needless to say – while Vide is still a very good emulator – these kinds of timing experiments require a live and working machine.

Another beautifull thing is – it seems the routine does work on all vectri I own flawlessly (I have three different vectrex, one of them of the NoBuz Generation).