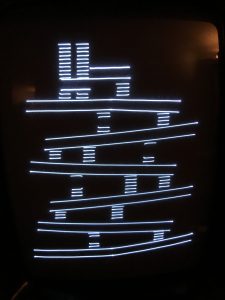 A while ago I had a friendly discussion, whether a game like Donkey Kong is possible on a Vectrex.
(No, I don’t intend to build a Donkey Kong clone – my excercises here are purely accademic)

The general question was, can the scaffold, that is the base of the frame be displayed in a timely enough manor, that a game in about 50Hz is possible.

The first very straight forward try was – draw the thing in Vecci – and look what the cycle counter says when you “auto” run it: 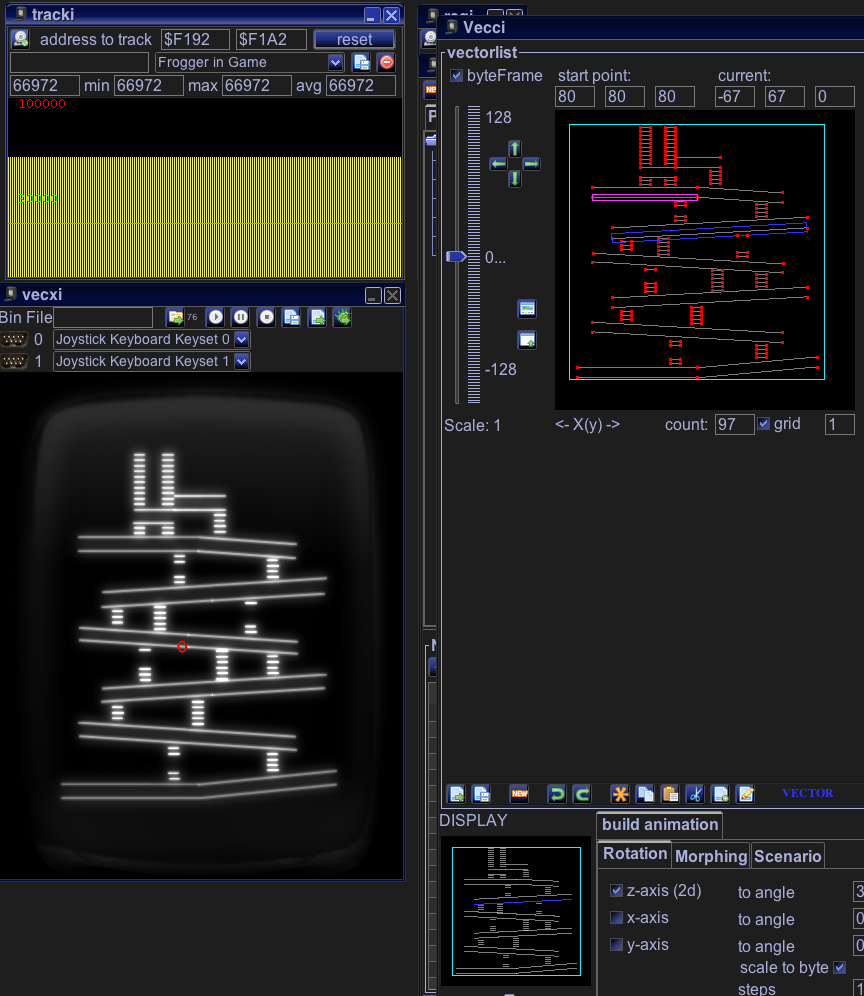 Well it LOOKS ok in the emulator but if you peek at tracki – you notice that screen refresh rate is about 23Hz (66000 cycles) which alone is really terrible, but there also is no Kong, no Mario, no Princess, no hammer and no barrels. If you would add these things it would not only be terrible, it would be really shitty!

While this was a very EASY approach, perhaps we should step back and think a little about it.

Lets first do a bit of “math”, from experience I’d say every “sprite” might take up to 1500 cycles to handle, some more some less, but lets take 1500 as an average.
We have following “sprites”:

Geee – that is a tough one. Only thing we have to do is shorten it to over a quarter of the time. Easy peasy…

There seem to be in general two different entities:

a) the bars that make up the scaffold

Bars are “large” vectors, and ladders consist of many small vectors, perhaps we can use that to our advantage. Using one draw routine (as the drawSync autogenerator does) prints every (EVERY) vector with the same scale. And as we all know – scale is time. Large vectors – take large amounts of time. And if we mix large and small vectors – and all vectors take the same amount of time – than also the small vectors take much time.

So let us do the “divide and conquer” routine :-). 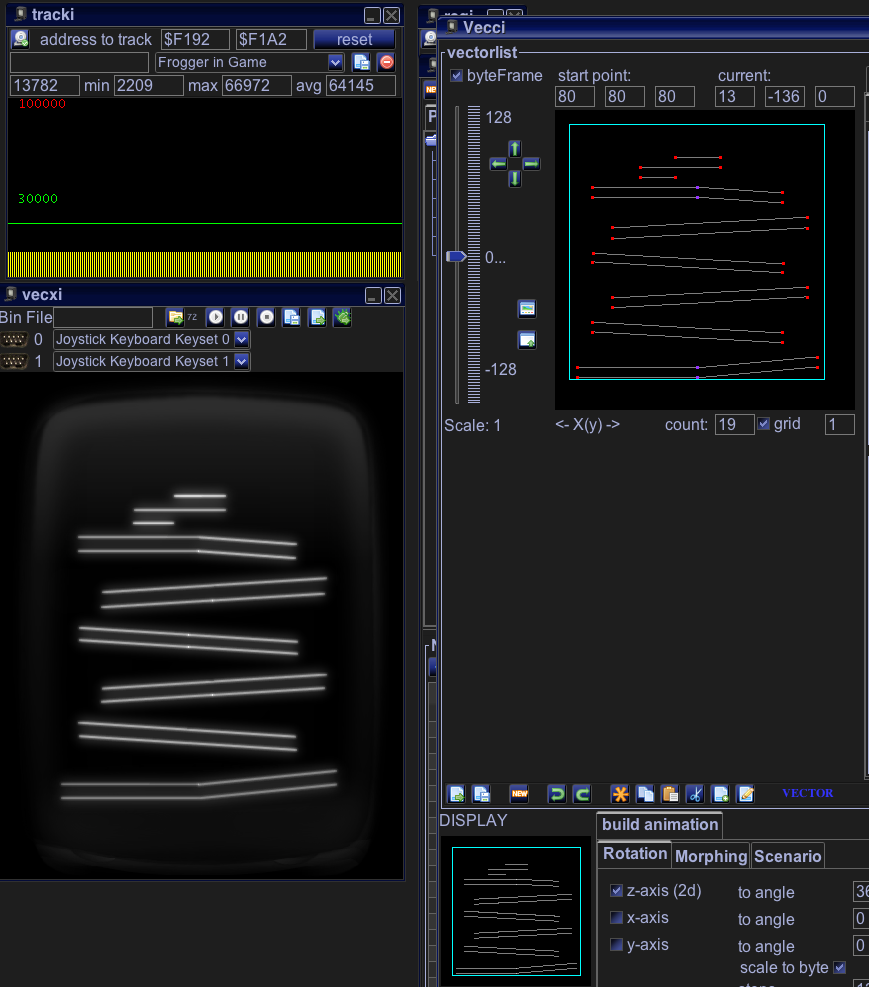 These are the bars alone. That does not seem SO bad – apart from the fact, that the bars alone take all the time that we are allowed to take for everything.

Now I press “Isidro All” – which optimizes the vector list, which reduces the cycles to about 10000. Nice!
While I examine the vector data – I see that there are a couple of vectors which are longer than 127 “pixels” – ouch. That is bad, the autogenerator makes at least two vectors from each of those – what else can he do – vectrex is an 8 bit machine.

Through experimentation (and vecci) I find that if I divide every vector by 1.52 – than I will have a maximum length of 127. Now each vector will be drawn as ONE vector. To compensate the size I will use a scalefactor of $c0 instead of $7f. But sometimes even a larger scale is better!

For the “drawSync” this did not give me a real speed increase. But now I am able to use another generator option, which might be better.

CODE EXPORT
Code export – as the name suggests exports the vectorlist as CODE, not data. It usually produces big fat ugly code. But in this case it might come handy. See, the whole scene above is actually a “fixed image”. Nothing moves, nothing is ever changed. You might say it is a background image of the game.

Ok, by pressing code export – we generate code that uses about 8900 cycles – jupee! We are getting faster!
Now we have to enter the think – tank again.
What does the generated code do?
There are a few distinct sections:
– move somewhere (code block)
– draw something (code block)
– move again (code block)
– etc…

The complete image is drawn in one go. This has several disadvantages – mainly 9000 cyles for one list is huge – and drift will be visible. We will remedy that shortly…

Also  – now… we still have our large vectors – because of these the scale factor is still $c0 – which is still HUGE.
If you look at the image you will notice, that each “bar” consists of two parellel vectors, which are “connected” by a move vector.
A SMALL move actually!
Now – what we are going todo is – is optimize the auto generated code. For readability reasons I replace those code blocks with macros.

I replace the “in between moves” with moves that only have a scale factor of 12 (instead of $c0) and increase the strength accordingly (factor 16).
Also we will draw each bar “seperately” – not after another. This means after each bar we go to zero, which will give us a much more stable image – but the nice effect is also it is FASTER.
Since with a scale of $7f (from the middle) we can reach the whole screen! And $7f is quite a bit smaller than $c0, 65 cycles actually  within 65 cycles we can easily do a zero ref. This is cool – we are faster AND more exact! 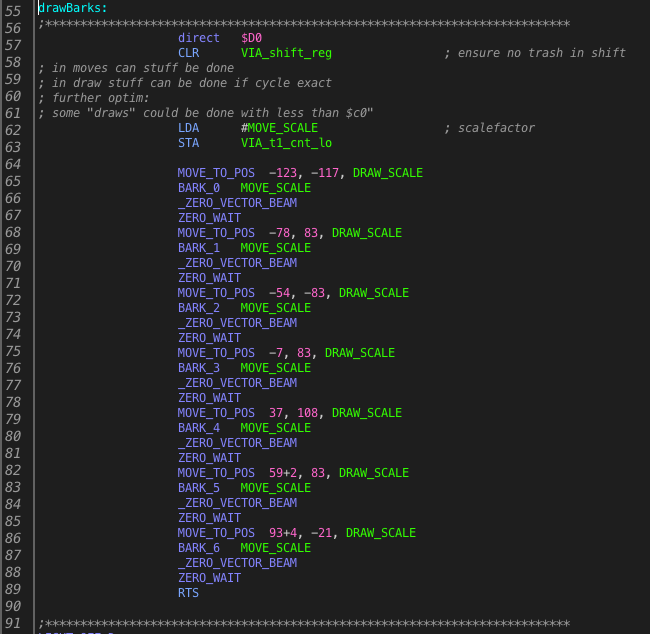 Using all that “magic” -> results in less than 7000 cycles. While I could probably squeeze a few cycles more out of it – I’ll let it stand at that, start looking at the ladders.

I tried several options that Vecci represented, like smartlists (which was difficult, since the delay is implemented by using NOPs, and doing NOPs for a scale of $c0 resulted in branches out of bounds etc). Sync lists etc… but everything out of the box was quite slow (> 40000 cycles).

Thing is, while the ladders consist of small vectors – the positioning uses a larger scale – and the automatic routines – use ONE scale not several.
So the only sensible thing do was, to split all ladders up and do each ladder on its own, not one large list.

Each ladder must be placed seperately using one scale factor (move scale) and drawn using another (draw scale).

Once I accepted the fact, that I had to draw them seperately anyway – I sort of “left” vecci and started to code.
A ladder (like above) is quite a simple thing, it consists mainly of three entities:

These three steps repeated in the right order “draw” every ladder. I programmed an optimized macro for each step, and “applied” those.
So e.g. the bottom right ladder looks now like: 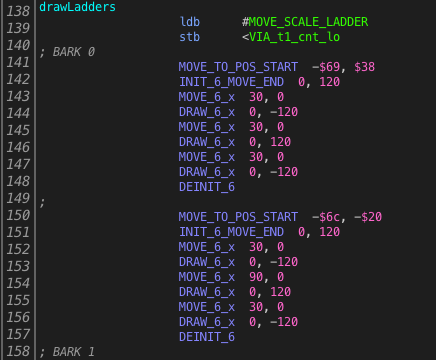 Sure the ladder could be a bit “straighter”, and the optimized drawing takes some toll … but hey – it still is a vectrex!
(And hey, there might be some better coding – I put this together in about 4 hours…)
The complete image of the level (as shown in the first image on this blog entry) is displayed in 13540 cycles. The image is ROCK SOLID, since every ladder and every bar is placed from zero. No wobble at all, and probably enough time to spare for a complete game.

Slightly more optimizations might be added, like:
– all moves could be done with highest Move value = -128 / 127, than the scale could be optimized to that strength
– there are some smaller BARS, these could also be drawn with a smaller scale (and higher strength) – look at BAR 6, and the bars that halfway change rise
– the ladder injards might be optimizable further (either y or x is always 0, probably can take advantage of that somewhere)

So – anyone who wants to do a “donkey kong” for vectrex… I think it is very well possible.

If you want to look at the code… I produced, download DonkeyKong.zip (40kB) and open the project in Vide.