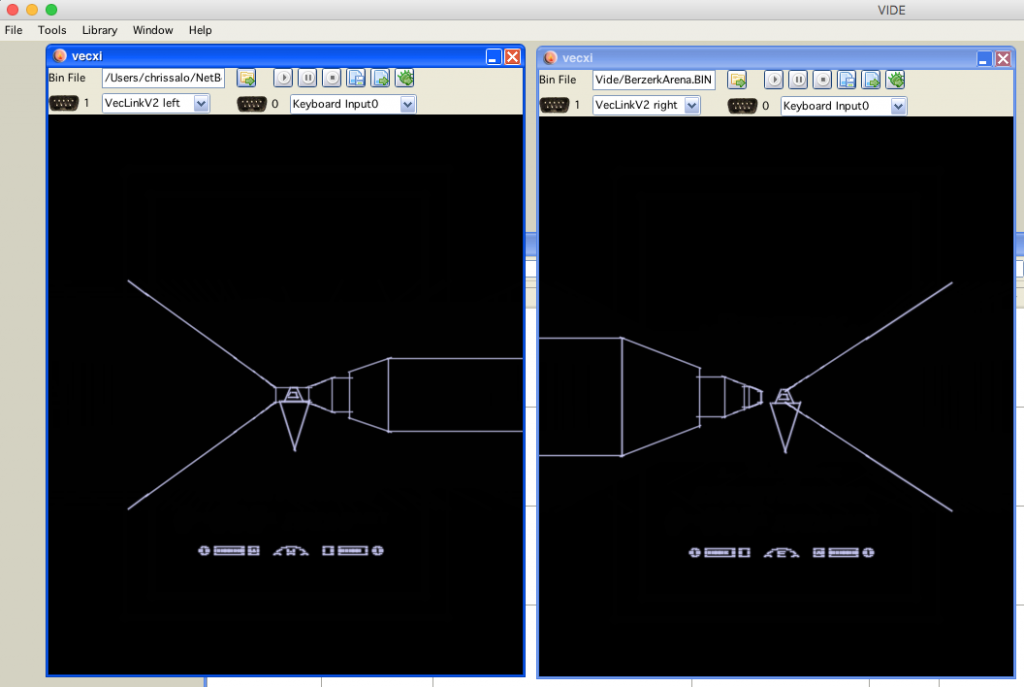 I must revise the last sentence of my last entry:

that was not the case!

Looking at the resulting source code after finally implementing the two different versions of veclink cables (which are known to me) they DO seem to have been easy to implement. But it certainly did not feel like being easy or plug and play.

That is about it.

Above that – even if Vide is outstanding (*cough*) at debugging vectrex binaries, Vide was never really built for debugging two vecxi instances at the same time which are connected via a “link” cable – which are trying to write single bits at the time and trying to synchronize all the time…

Anyway… the above image shows a working version of veclink V2, which is used by BerzerkArena.
BerzerkArena is an unfinished “prototype” done by Alex Herbert. I only recently got the binary image of a fellow vectrexian on the proboard forum.

Like the other known programs of Alex (YASI and Protector) BerzerkArena (though unfinished) is a very polished and IMHO outstanding vectrex game. The two player variant (there also is a single player game incorporated using a computer adversary) using a link cable plays very smoothly and is (to my knowledge) the only FPS game on the vectrex and must be very thrilling to play with another human.

In 1983 (that would have been 10 years before Doom!) that game would certainly have enspired most vectrex owners to buy a second vectrex and many, many more people to buy two vectri at once – YES in view of the used hardware (from 1983!) it IS that good a game! 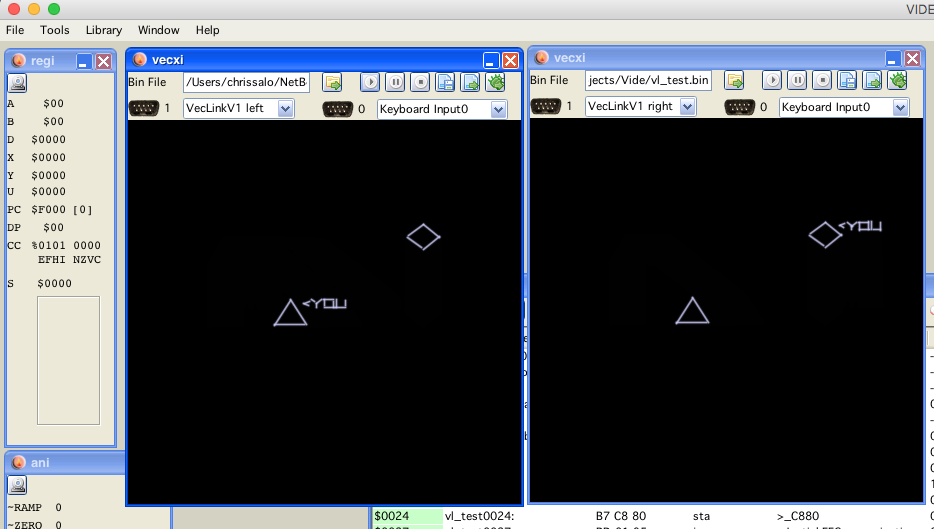 Here another example, this time a show of veclink V1 used by a sample binary.

Both cable versions were (to my knowledge) conceived and realized by – again – Alex Herbert.
Version 1 uses all four joystick “buttons” of port 1 and uses the CA1 line (button 4) to synchronize. Looking at the description of the PSG and VIA and reading Alex late comments on version 1, it is revealed that version 1 is somewhat unstable, since button 4 (the CA1 line) does not always hold its desired voltage. So Alex did a revision 2 which only uses button 1-3 and leaves out the “unstable” button 4.

Reading his comments this one is much more stable. I strongly advise therefor – if anyone is interested in jumping on the train of doing veclink “games” – use the cable design veclink V2.

(The release version of Vide will include the wirings of the cables and example binaries – as will be (hopefully) provided for all emulated devices.)

Some technical changes to Vide: