Nevertheless, Malban was busy, and did quite a few things – in the sound department. Malban added Mod support, meaning, there is now a panel accessable through vedi, which allows you to convert Mod files (amiga music format) to vectrex. For that he used a translated (from Pascal) source from a guy named “FieserWolf”.
In addition he also added a Mod-Player (IBXM), and some stuff to make mapping of intruments easier…

After adding support for Mod, the next logic step was including his own old routines which converted YM-files (register dumps of soundchips) .

After that even more sound support was added for files of a windows tool called “AY Sound FX Editor”, this an editor for sound effects for PSG sound chips. It is discontinued, but nonetheless it comes with a library of about 200 cool sound effects in a format “*.afx”. These files can now be loaded an played by Vide (thanks to the player routines of VectrexRC), apart from some bugfixing that were the doings of the last days.

Today Malban chose to enhance the YM files handling again (despite him saying he would do vector stuff). 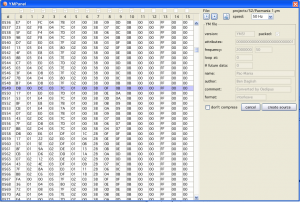 a) he discovered that the latest “player” routine of ym-files was buggy and he stepped back to an older (less performant, but bug free) version.
Debugging a 15 year old sound routine with sparse comments is not easy and he chose as yet – not to!

b) he added a ym-player to the generator window, and he will probably begin writing a ym-editor soon, this might lead to something like the above mentioned (discontinued) tool. 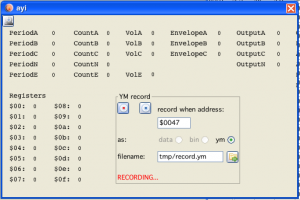 c) he added a ym- “recorder” to the ayi-panel

All these things are not finished yet, but for first baby steps they all work rather well – AND it looks rather nice and shiny!