Today Malban deemed it fit to get me out in the open a little bit more – and did a page for his programming projects. Yippee! I will be famous!

Currently I am an unfinished java program, which (when finished) can be used to build, examin and debug vectrex programs. If you don’t know what a vectrex is – go away! I don’t like you – and you won’t like me!

There are several things I can do already, some of them better – some not so well – but we will get to that.

Malban did not build me completly on his own, although he tries to groom and nurture me to a full program, parts of me existed befor as stand alone available sources from other people. E.g. my disassembler part was originally written by a guy named “Sean Riddle”. The assembler inside of me was done by “William J. Yakowenko” and so on.

Malban is pretty thankfull for all these parts he can resuse because other people were generous enough to make them available (as public domain, under licenses (like GPL) or other). A full list of credits will be available once I am publically available (which will be with all my sources).

I don’t really know how Malban thinks he will be able to “completely” finish me, because every other day he gets new ideas what to implement next. Than he tries something new and half done other stuff rests while new half done stuff is made. I wish he’d get his stuff together and keep to one thing and finish it… but well what am I to complain.

For example, yesterday he was all nuts about finally finishing the syntax check. There is one thing I am driving him crazy with (parameter of macros, they can be really weird hehehe e.g. a macro which does something and takes 3 parameters.

I think I am winning and he will give up soon trying to get everything right – he should also, since if there are any users out there, they certainly can live with their own stupidity of building such weird stuff.

Today he did something totally different, look at the following image: 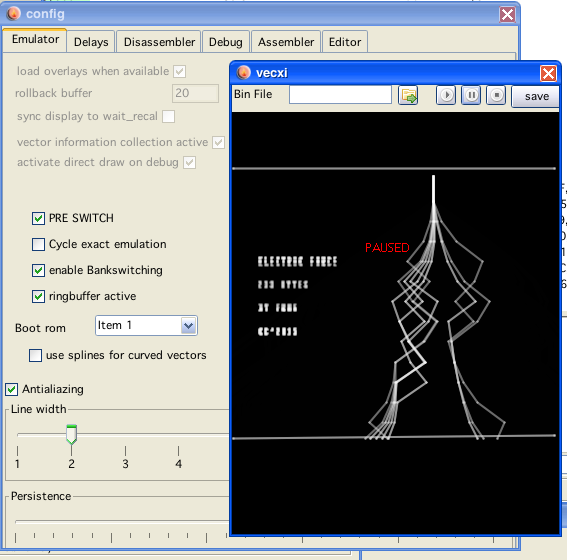 At least when you know what it looks like on the real thing.

But you see that little checkbox in the background config window? “Use splines for curved vectors”. 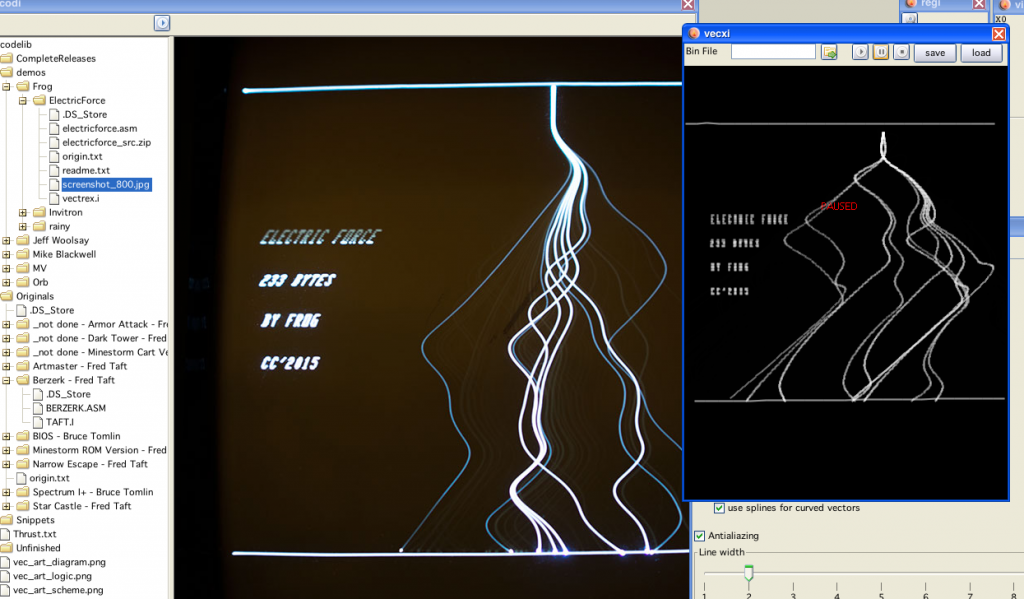 That DOES look more like it, doesn’t it?
(I mean the vecxi window on the left!)

Now, the problem is still that some vectors which are not really “splineable” are splined as well.

The method to detect is pretty simple, if the DAC of the vectrex is updated without turning the light off (RAMP = 0) and y-integrators are “switched” on, that should mean, that curved vectors are drawn.

BUT that test alone is obviously not sufficent. I guess he’d better look a bit deeper :-).

The day befor yesterday he started saving and importing vector lists in vecci. What is vecci you ask? Vecci is the part of me (unfinished) which will allow you to edit, import, convert and build (animated) vector lists and save/import them in any conceivable (and arbitrary) format.

Yeah, I know that sound a bit ambitous, but hey, its me, VIDE who is talking, certainly I will do all that!

Take a look at the following screenshot – and you will get the idea: 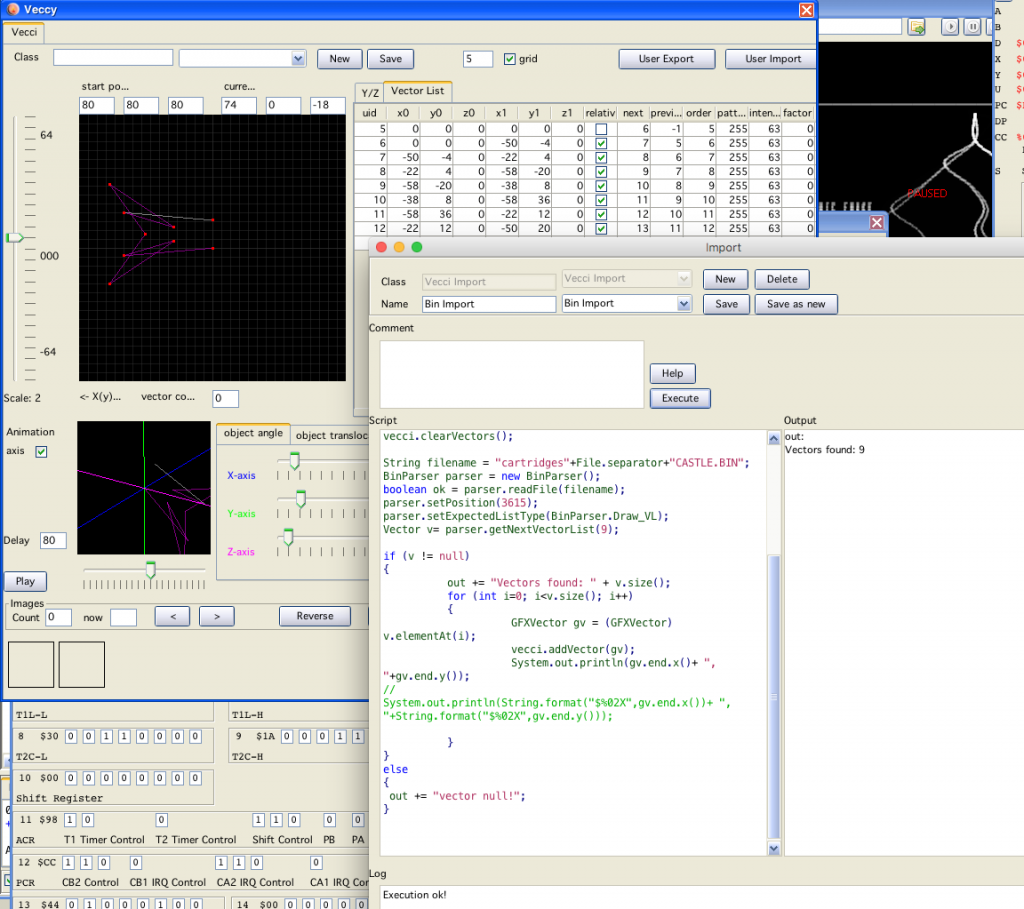 There are import and export buttons in the upper right area. Each of these buttons opens a “script” panel. Here the user can define (or use already defined) scripts to import or export vector data.

In the example you can see that Malban, as a test, imported the playership from the cartridge “Starcastle”.

My guess is, that Malban will provide quite a few ready scripts, which will enable users to import/export nearly everything – or if not – they can do their own scripts (and perhaps even give them to others?).

With this method it will also be very “easy” to e.g. do a “compiled vector list” output – if you get my meaning!

There are already a couple of export scripts and other import scripts.

The scripts can access data and code inside of me, in the example you can see a reference to a “BinParser” which is quite straight forward. But there also is a “DBParser” ready for reading sourcecode…

Talking about half finished. The day befor vecci… was a “project” day. Nah… not finished either, but something done… 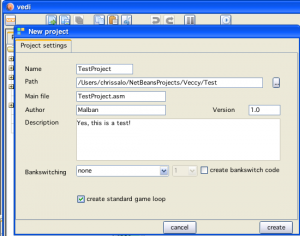 Sources for a game loop and “vectrex.i” file is created (when selected).

Although you can’t do much more with projects yet.

Another day befor that: 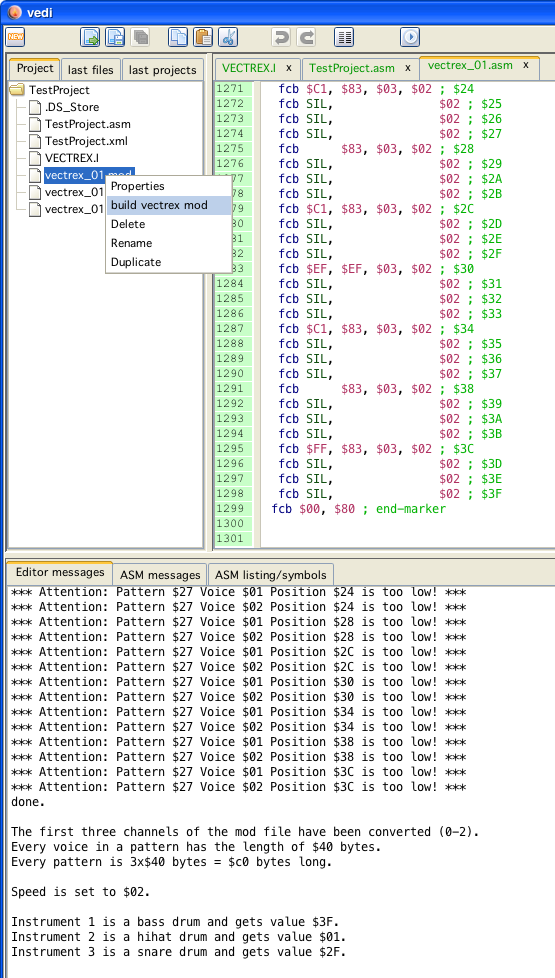 Converting (Amiga) mod files to a vectrex readable format (ok, ok, he didn’t really program that, he just converted that from a Pascal source).

I am far from being finished, but I have many, many unfinished parts, and I will keep Malban busy for quite some time…