Is driving me still nuts.

I more or less decided to do the “bosses” next. Last time I showed you parts of the new insect boss. Meanwhile I have progressed to the next boss – the Sinistar themed levels now also have an own boss.

I uploaded a short video of the encounter to youtube, see:

Also – again I am afraid I will sooner or later get into memory trouble. While it is part of the fun of programming a retro console – to optimize stuff and squeeze bits and bytes – I also have a “vision” how I would like Vectorblade to be. And still I am afraid 64kB will not suffice.

– change my vision
or
– get more memory.

I STILL will try to get Vectorblade done in 64kB but meanwhile I will also seek for possible other solutions. One possible solution I followed the last couple of days I will describe in this post.

During above mentioned “talks” following possibilty emerged, which gives me 1/3 more memory, namely 96kB. Graham asked innocently in one of these “talks” why can’t we use the memory between $8000 and $bfff?
The simple answer is – we can! Just nobody did! (apart from blending in some RAM or using certain addresses as “HotSpots”) 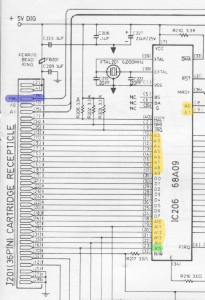 This is what I am testing out just now.

The “classic” cartridge
uses only address lines A0-A14 (yellow) and can address the range from
$0000 – $7fff.
“Every” cartridge can use this memory (old original cartridges might have saved some copper and not connected the address lines though). Here you use eproms or memory chips with up to 32kB (or less depending on your memory allowence).

The ~CE is connected to A15 (green). Chip Enable is zero active. Meaning, when “0”, than the chip is enabled (haha). Every RAM/ROM/Eprom etc has a CE flag. This flag tells the chip whether it should answer “questions” asked to the BUS.

IF on the BUS an address is received which falls in the range of the chips address “possibilities” AND the Chip Enable flag is set to enabled, THAN the chip “answers” to the request (putting values on the data lines of the BUS).

For the default this is easy – everything in the first 32kB will be answered from the cartridge port, thus ~CE is very quickly realized with address line A15.

Here you use eproms or memory chips with a up to 64kB.

~CE same as above.

Here you use eproms or memory chips with a up to 128kB.

~CE now must be handled differently. If ~CE were connected as above we would only be able to access memory for the “lowest” 32kB of each of our new 64kB banks.

I will not explain too deeply here what is happening – but using boolean logic we come up with:

Now – that I knew the above “basics”, I quested on how to get a cartridge PCB done. I heard of “eagle” – one of many layout programs. For whatever reasons that was my first choice and for really small pcb’s it is freely usable.

I downloaded it and tried first tentive steps – and it drove me nuts! I asked around – but actually got not really much help – so I quested further on my own untill I got a little “feeling” for the software (and a soar mouth from swearing).
Than I found Franks Vectrex PCB design (link: https://hackaday.io/project/28295-vectrex-cartridge) – which I could use as a starting point.
(size of the PCB, placement of the holes, cartridge connector etc…)

Thank you Frank, for making that freely available!

This is what I produced after about 10 hours (I guess) after first downloading eagle: 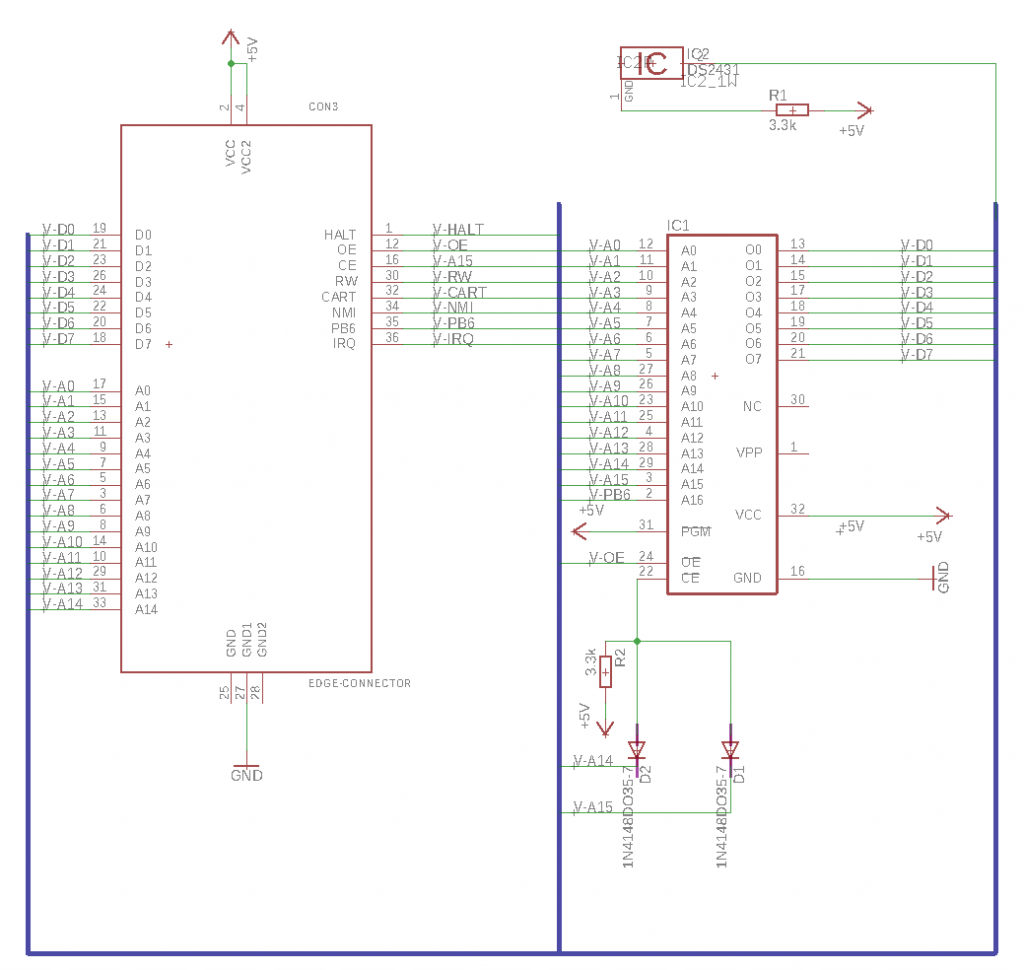 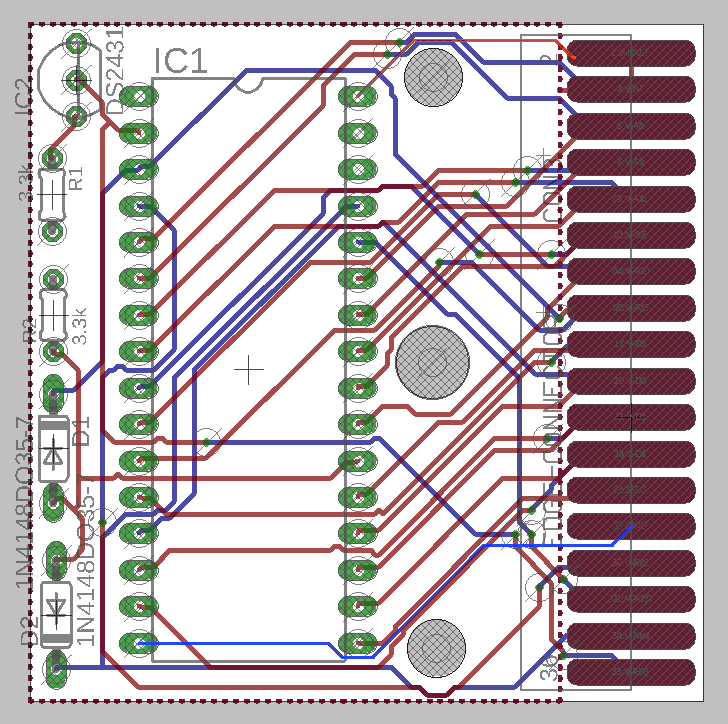 Ok, ok not beautifull – but I hope it will work out fine! This is a prototype!

I always said I am a software guy – not a hardware guy.
At least partially I want to change that. I updated my workspace this week to: 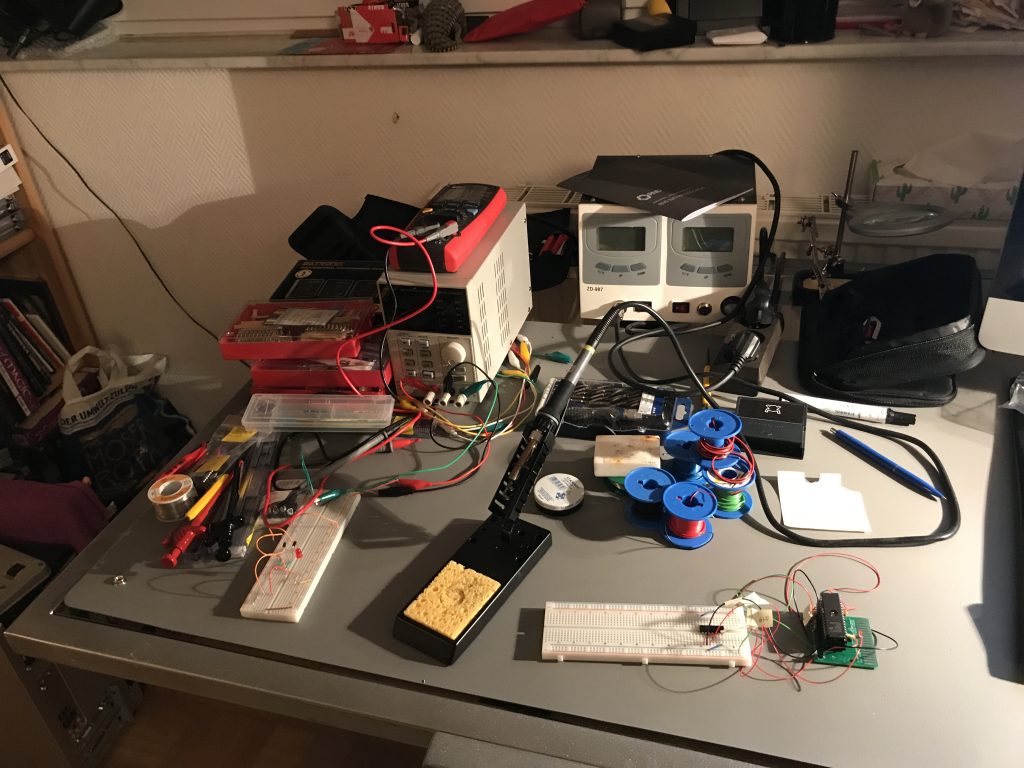 Because – above “theory” is all well – but before ordering that fancy design – I would like to test it first.

Which I did not already have lying around – this took actually a couple of days.

Above ~CE logic is an AND. How will I realize an AND on the PCB? Never done electronic – Ordering an AND gate and do breadboarding using an LED.

Didn’t get it to work Hmpf.

Using Diode Logic to implement an AND -> and using LED to test:
(yes – I know babysteps) 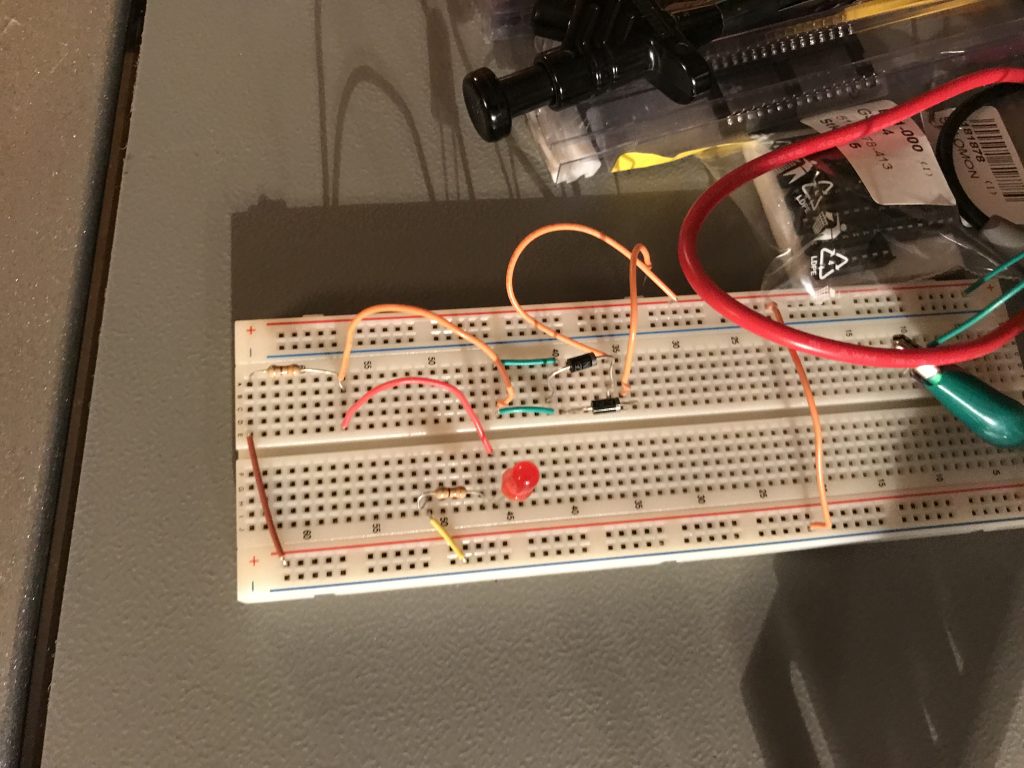 To test the above circuit I upgraded a known PCB. 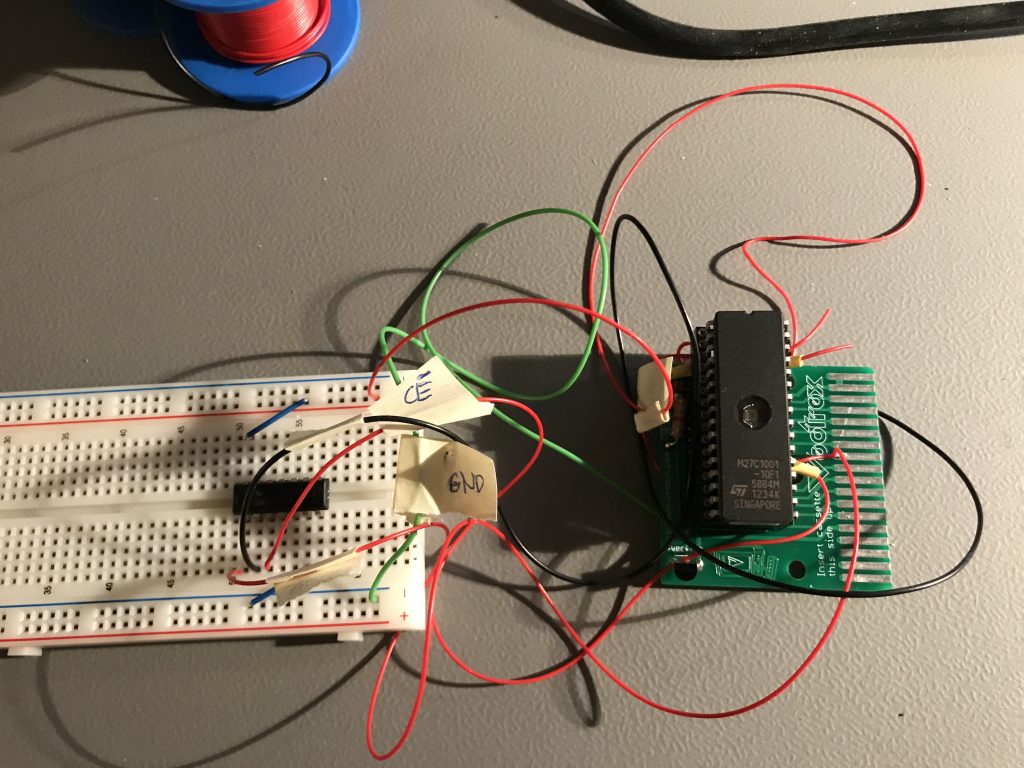 Here I use the AND gate chip. First try on a Vectrex – WORKING. I’ll be damed! STRIKE! 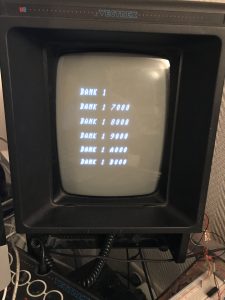 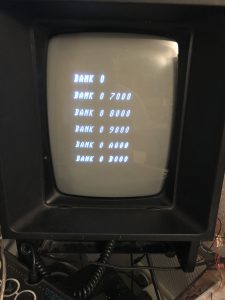 Now – there is not much space on the PCB, I’d rather prefer Diode Logic: 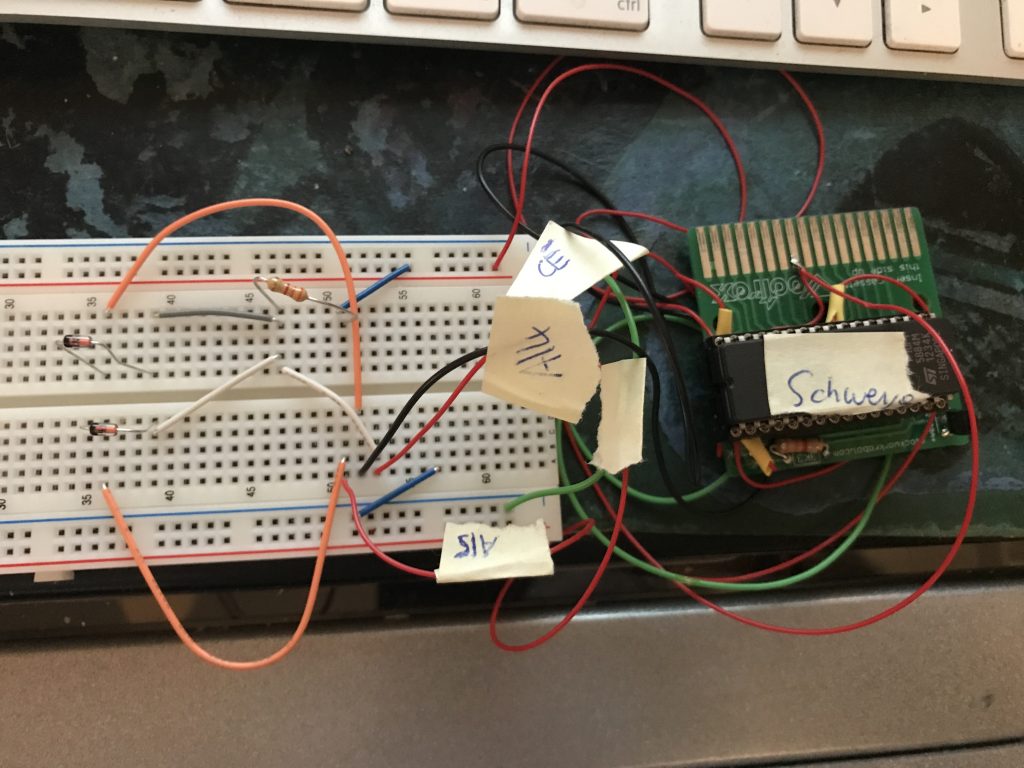 Ok, this did not work out of the box. I calculated the resistor wrong (well didn’t calculate at all). Using trial and error due to me not understanding electronics all to well – I now use a 3,3kOhm resistor, and it WORKS!!!

Updating the Eagle layout – and searching the web, resulted in: 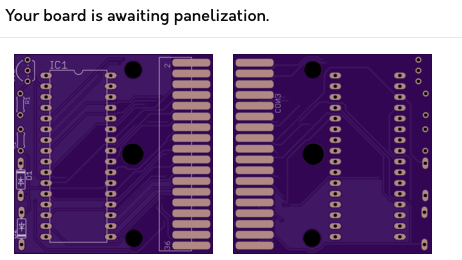 Me ordering a prototype of my first PCB. PROTOTYPE! Yeah, I know I could draw a small Karl Quappe on it… but guys – really – prototype!

Thomas is in Germany for two days – and with a wink of his hands, he updated VecFever to support 48kB Bankswitching – although it does not work with the RAM-drive option. But Hip hip hurray anyway!