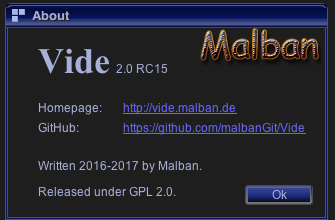 Today I make the first public version of Vide 2.0 available – Release Candidate 15. As the naming suggests there have been quite a lot of RCs before – and there still might be some to follow.

I hope most bugs have been squashed, and nearly all things I wanted to do for version 2.0 have been done (or at least started).

The Vectrex “C” (gcc 6809) has become quite a lot more stable – thanks mainly to Peer – but there are still followups in the pipeline. Last I heard of Peer was, that he was again “toying around” with getting rid of the framepointer and doing new “header files” (which already changed quite a few times).

Despite of me doing some posts before that described the changes in Vide I will again summon up what I can remember.

Biggest change would be the switch from java-graphics systems to OpenGL. Most of this was done about 4 months ago. That was probably the biggest “single” change that happened to Vide. Everything graphics wise had to be redone. I won’t go again into the details. If you at this point are new to the changes please head over to the appropriate blog entry: 25th August OpenGL Part II.

New features (apart from the engine) include:

I don’t know if anyone ever noticed, but if you started Vide not from its own directory – Vide wouldn’t work properly. I changed that. This does not seem to be a big thing – but programming wise over 100 files had to be changed and tested. This was also mentioned in another blog entry: 3rd of September

Debugging can be switched off (completely)

For people with slower computers – OpenGL was probably a huge booster. A second booster was introduced with a new internal system, how debugging is accomplished. Short form – you can completely switch debugging off.
(There still is the problem, that for some modern Windows 10 systems Vide is excruciatingly slow – the cause for this has not been found yet)

Support of “C” as a programming language for vectrex. Again see other blog entries (last couple of entries 🙂 ).

Additional changed in the last weeks:

I did a new LAF (Look And Feel) for Vide. The theme is quite a bit darker – but I got used to it really fast and so I kept it as the default (but you can always switch back to the old way – or do your own!)