Just a short update of what I have been up to after throwing opengl into the bin :-). 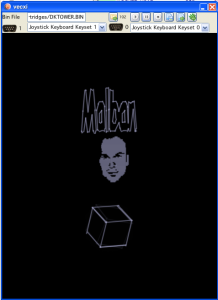 First I started out building a small demo for the vectrex – after all, programming the thing and using vide is always the best testing. I did some small steps, using vecci intensivly and also fixing some bugs.

As you can (not) see, I tried adding a “hidden line” (rotating) cube – which works quite well.

Originally I intended to add “hidden line removal” as a feature to vecci, but at the moment I have doubts whether I really should.

I have the algorithms sorted out and tested, the only things is: vecci is a vector tool. In order to do a propper hidden line removal one has to define “surfaces” of some kind (or “faces” or whatever you would like to call it). After all – behind a line nothing can be hidden. This means I must provide some functionality for surfaces in vecci or planes, or whatever. And at the moment I doubt that this kind of change really is such a good idea. Anyway – I postponed working further on that particular subject.

For the demo I also added a mod file and a ym converted file.

One thing lead to another and I found quite a few things which I did not like about the mod-routines. So – I changed them and in between did a documentation of the BIOS sound routines, mostly concerning what the ADSR and TWANG parameters really do in relation to vectrex sound. 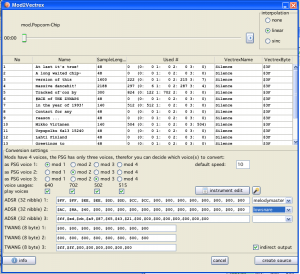 The mod playing routine changed a little bit, so it now supports:

Right in the same direction goes the “instrument” editor.

With that you can “on screen” develope ADSR and TWANG parameters and changes. You can also listen to the settings you edited. Although for some reason the editor “sound” is still slightly different from the vectrex sound.

Well there is always more that can be done :-).

Hehe, one last thing I did as a fun exercise – I built a Vide-BIOS: 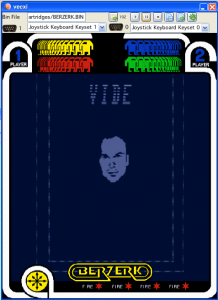