What is Vectrex Integrated Development Environment? 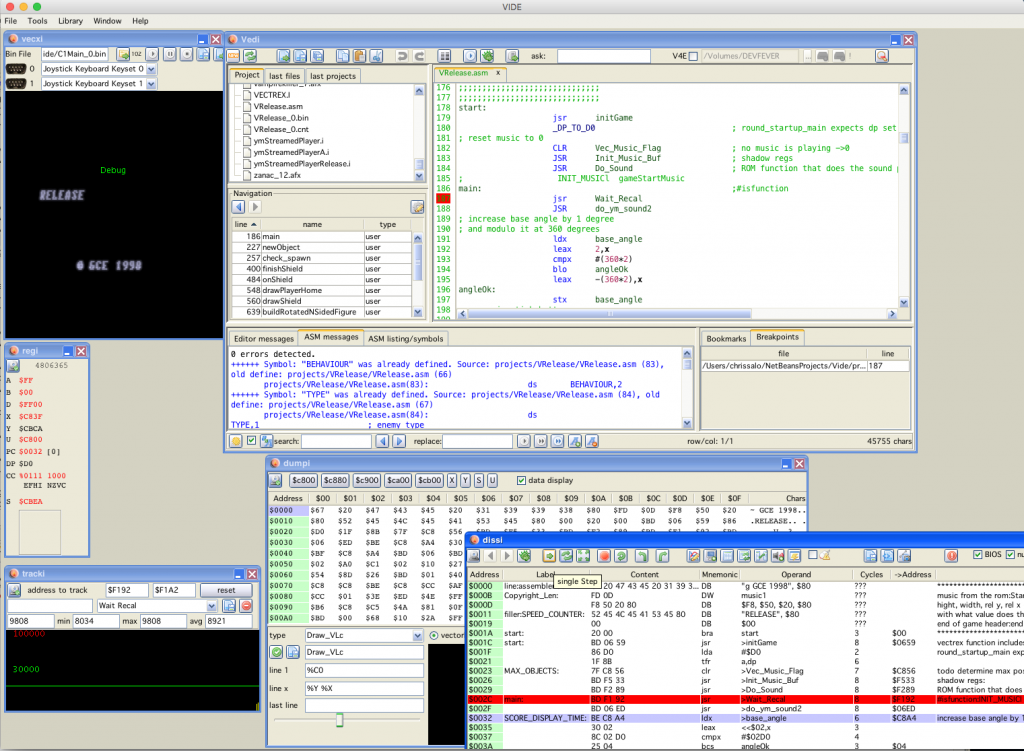 Vide is a set of tools bundled under a single (java) gui that is supposed to make development of new vectrex programs more easy going.
Vide consists mainly of:
– vectrex emulator
– vector drawing tool
– 6809 assembler
– an editor
– documentation
– and a set of features to edit music and images and generate code for vectrex

I wanted to achieve two main goals with Vide:

Vide is supposed to manage menial tasks every developer has to go through before (or after) doing the really interesting stuff.

Nothing can be automated in the department of gameplay, game ideas or clever algorithms.

But supporting you to draw, getting sound played (converted), compiling and debugging THAT is IMHO very helpful and these are the sections I tried to cover in Vide.

The second thing I tried, was to achieve a level of emulation, that comes really close to the real thing. I do realize that nothing compares to a real vectrex, but as of now no direct connecting from Vide to vectrex hardware is possible [any hardware developers out there who want to help out?].

Nearly all things I found out about cycle exact timing went into the emulation core. I do believe as of now Vide is the most exact emulator on the market (apart from the stuff Vide does not emulate at all 🙂 ).

Nonetheless, if you develop – do get a VecFlash or a MVBD device or something similar.

Vide is in NO WAY a fast or efficient emulator, it was never intended to – it was build to be used as a development tool, and emulation to be as precise as I am knowledgable to. If it to slow in its standard settings, under configuration you can chose more performant settings, also be sure to look at the FAQ-section of the documentation.

What’s it made of?

Vide is a collection of different tools I gathered from different sources (some of my old work, some stuff I found in the depth of the internet, and some totally new stuff as well – just for the good mix!). For a concrete listing of all parts, please look at the documentation.

In January 2016 I started the project “VIDE”, although I did not know that at first. In the beginning I wanted to program a new (vectrex) game, but after sitting down and thinking how to best get started, looking at available tools (DVE, ParaJVE, Mess, VecX, AS09 etc…) I realized, that I dreaded drawing out vectors.

Once upon a time I did already program a vector editor for vectrex, some other tools are available, but many if not all of them have seen better times. And the good old C or C++ programs we did for DOS or Linux are not that easily reused today.

So – it all started with the thought of doing a smallish vectrex drawing tool in java – called vecci.

But thinking and surfing again took hold of me, and I got the idea to do something even “bigger”.