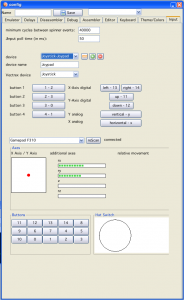 Just a few updates about the last days. The “major” thing was adding support for more input devices. Thru the use of the JInput library many devices are available (Win/Mac/Linux).

JInput requires native support, so the native libraries will be included in the next release version. Vide will still run without them however. But as before than only the keyboard will be accessable as input device.

Before any user actually can USE an input device – it must be configured (in the config section – new tab input). This is as yet not beautiful and not documented. But it does work :-).

Also implemented (on the vectrex side) are now “spinner” controllers. This can be emulated by the old keyboard, or JInput devices. My personal findings for e.g. “Rounders” is – that it does not add to playability (on the emulator) – but at least that input method is emulated.

Some other stuff I did:

I added support of a new vectorlist format. The format allows output of so called  synced vectorlists. Vectorlists (and example code) can be created by vecci.

With this new format one can output large vectorlists without worrying about lose ends: 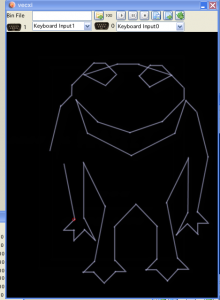 See this old frog, this is the list directly taken from the Frogger game. On the emulator (and actually all vectrex with drift) – the frog will be slightly (or sometimes more) distorted. The reason is, that displaying a list of 63! vectors in one go invites the “drift” in. And especially since I was dumb enough to actually “close” the list – the fault can be seen even by half-blinds.

The following image shows the same vectorlist – but this time I let vecci export it in the new format: 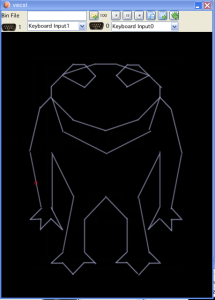 I like that output much better… (although it is slightly slower).

Next things I am thinking about:

Thats it for today…