Today I would like to write a little about string-printing (same applies to all raster images).

How are strings drawn by vectrex BIOS?

The vectrex BIOS stores a raster “image” of all characters supported, this can be seen e.g. by using dumpi:

Each char is represented by 7 bytes, each byte repressents one row of the character and each bit position one column. So the “pixel” size of one char is 8*7 (height * width).

If a string is to be printed, the BIOS loads the address of the bitmap, examines each character of the string and uses the char values as a lookup reference into the raster image and outputs in one long line the first row of all characters of the string.

Actually each line of a String output is one long line which changes its “pattern”-byte continually along the way. Lets call this thing a “string-line” for easier reference.

All raster outputs on a vectrex are more or less done exactly that way.

Outputting more than one line

There is virtually no way the above explained can be made more efficient. To output one byte of (raster) data you need one full “shift cycle”. One shift cycle takes 18 (CPU) cylces. You can finish that sooner – than you did not output 8 bits, you can finish that later, but you will not output more bits.
So – exactly 18 cycles is what it takes. Fullstop!

Take a look at the following image, here I show three different ways what can be done: 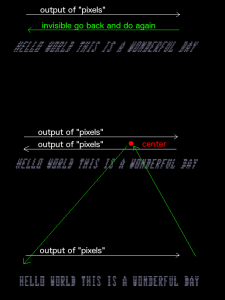 a) BIOS routine – the original

This I call “uni directional output”, in short:

b) Moon Lander routines (and some of “thomas”)

This I call “bi directional output”, in short:

This I call “synced output”, in short

uni directional output
Speed – medium (shown example 10486 cycles for “Hello world this is a wonderfull day”)
vulnerable to vectrex drift, the longer the text the more “italic” it gets

bi directional output
Speed – fast (shown example 6209 cycles for “Hello world this is a wonderfull day”)
vulnerable to vectrex drift, but not as much as “uni”, tends to be a bit more “grizzly”
reports, that it does not work on all vectri (although I have not seen that in real live yet)

synced output
Speed – slow (shown example 12443 cycles for “Hello world this is a wonderfull day”)
not! vulnerable to vectrex drift

Example routines will be included in the next version of Vide.